It’s already final exam and you’re tired, stressed out, and anxious about all those tests. Moreover, your relationship with him is getting worse day by day. Ever notice that your stress from tests and bad relationship make you get pimples or worse, acne? Does stress cause pimples? Yes, it does, it’s not only just your imagination. But a clinical professor of dermatology at the University of Texas Southwestern Medical Center, Lisa A. Garner, MD, FAAD, said that whenever you already have pimples and you also get into a stressful situation, it seems to be the cause why your pimples really flares up. In other words. Your stress won’t trigger a new case of pimples but it may be a reason why your pimples get worse, especially if you already has the skin disorder.

Relation between Stress and Pimples

For a long time, doctors have suspected that stress is one of the causes of pimples and acne, but the evidence was not strong enough. Later, in the past decade, research has shown that the doctors may be right about their suspicion. Exam week is a period in which many student feel stress compared to weeks without testing. Pimples and acne are highly correlated with increasing stress as the researchers concluded. 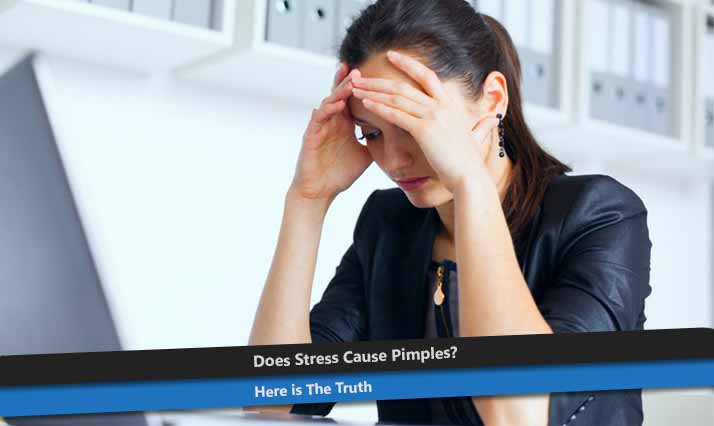 But still, the scientists don’t know exactly how stress worsens pimples. They do know that stress hormones will produce excess sebum according to Garner. Sebum is the oily substance which mixes with bacteria and dead skin cells and they will clog pores. This lead to either pimple or acne. Someone will upregulated him/herself when he/she has acne experiences during stressful events. This means that that person will do sebum producing.

More oil will produced to clog pores to allow more pimples to form and also give the stressed individual more stress. This study also strengthen with researchers from Wake Forest University School of Medicine. A study of high school students in Singapore in 2007 also found that pimples worsened during exam weeks compared to low-stress weeks such as summer break or first day of school. Stress will also make your skin unhealthy which lead to inflammation.

Those researchers concluded that the increase in pimples might be due to higher levels of inflammation and sebum produced during stressful events. Yet, they found that sebum production didn’t increased by psychological stress. The best option is to try to get rid of stress from your life. One of the excellent ways to get rid of stress is by exercising. When you exercise, your heart will pump and more oxygen will flow to the brain.

This will results in reduces stress response. You don’t have to go to gym, you can jogging in your neighborhood in the morning. Exercise for three times a week will make a huge difference to your body and also it will be beneficial in many ways, including your skin. The relationship between stress and pimples is not very clear, but it should be considered as one of the factors in triggering pimples.